Sweet and loaded with fresh flavour, these cupcakes feature peaches, coconut and pecans, a taste combination that is summer eating at its best.

At my last job I had the dubious honor of being the office vegan. Working at an office where no one else was even close to being vegan was challenging to say the least. It was not a problem for me most of the time but as it was a high pressure entertainment industry job, we often had food gifted to us or ordered in, such as pizza, ice cream bars and sometimes entire gourmet lunches. I sadly had to miss out on all of it and satisfy myself with my own brought lunch and snacks. We also had potluck days to celebrate holidays. Again it was all depressingly non vegan.

This improved after I had been working there a while. There began to be vegan options available. These cupcakes, brought in by a fellow worker, were one of them. My co-worker wasn’t vegan but did alot of vegan baking. The cupcakes were just basic vegan coconut cupcakes but she had made them spectacular by adding peach slices inside and topping them with pecans. They were amazing! Its such a great combination of flavors and textures, perfect for any summer party or picnic and for snacking. I decided this year to try duplicating them and these, while not exactly the same, come pretty close.

The recipe for these muffins is pretty simple. Just mix the dry ingredients in a bowl. In a separate bowl combine the wet ingredients. Add them to the dry and gently fold to mix. Be careful not to overmix or the muffin batter will become dense.

Next, you fill your muffin tin to 3/4 full with batter. Add two or three peach slices and top with more batter, covering the peaches. Top with a few pecan pieces and the muffins are ready for baking.

The muffins are baked for 35 mintues. After baking, its important to let them cool slightly in the tin. This will make removing them easier. To remove first slice with a knife around the top and then insert knife and go around the edge to fully remove muffin. Let them finish cooling on a baking sheet.

Theses cupcakes taste great with peaches but you can also use pineapple for a more tropical but equally delicious taste combination. Either way, adding fresh fruit makes all your summer baking special and more nutrious. Enjoy! 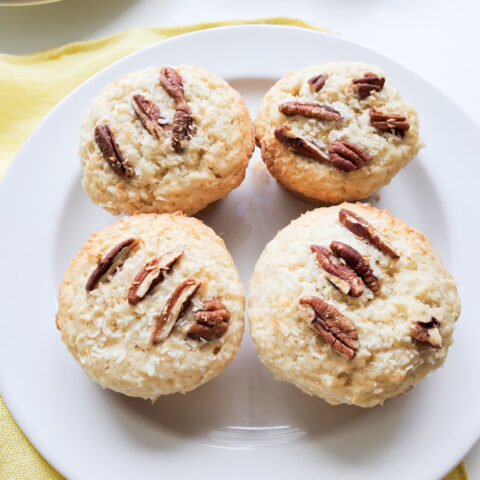 Hi I'm Una. I'm a vegan and animal rights activist from Toronto, Ontario, Canada. Welcome to my blog. I hope my recipes and blogs will be good company on your road to a kinder, vegan lifestyle and diet.